Nice going early on as we followed the river down to Balmoral. No Royal sightings. The Garmin routed us up a farm track which we abandoned after Tom was sent sprawling. Turning north we came upon three big climbs and a fierce headwind. At least it wasn't raining (yet!). Managed to find a good cafe just before the third hill where we encountered four friendly bikers - oh for an engine (oops - heresy). Fortified by tea and toasted teacake we resumed the struggle against gravity and the elements. We got to a summit at Glenshee - ski lifts etc, before a long downhill pre lunch. The headwind had turned to a side wind which left us leaning into it at a 13deg angle just to stay in a straight line. We lunched at Tomintoul in a pub with the biggest bottle of whisky I've ever seen - Tomintoul single malt. 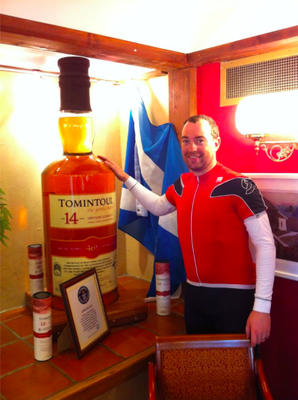 We aren't done with the Cairngorms yet. We set out and soon encoutered the Lecht - a monster of a hill. Oh, and it started raining, with the headwind blowing straight in our faces, like needles. By common consent it was probably the low point of the trip. Even the downhills were a struggle, with the wind almost bringing us to a standstill on one descent. The rain intensified as we descended to the moorland and visibility was poor. Is this what it was like when the Battle of Culloden was fought? Sodden and very tired, we couldn't wait to get to the mother ship. But the Garmin died and we weren't sure where the campsite was. At Cawdor we thought we were nearly there, but not so. Mandy was about to sally forth with a search party as we finally rolled into camp as the light was failing. Phew! Never did tea and treats taste so good. Never was a hot shower more welcome. 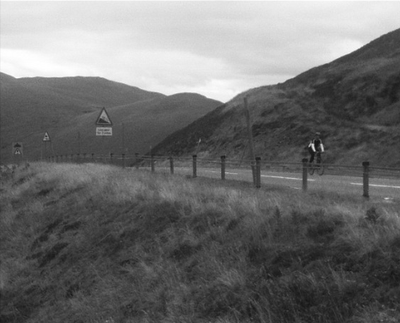 Posted by LePratt-LeJog 13:53 Archived in Scotland

Previous Next Table of contents

Comments on this blog entry are now closed to non-Travellerspoint members. You can still leave a comment if you are a member of Travellerspoint.

If you aren't a member of Travellerspoint yet, you can join for free.